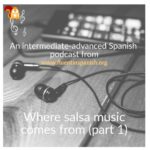 WARNING: To find the vocabulary list for this podcast, please scroll down to the bottom. You will see each word with its number. If you click on every word number link, it won’t work. This is because we are updating our website. Word number links will be ready in a few days. Thanks for your patience.

Have you ever wondered where salsa music comes from? Well this podcast will explain the origins of salsa music to you in Spanish so you can improve your Spanish as you listen.

Even if you do not live in a Spanish-speaking country, you’ve probably heard some salsa throughout your life1, maybe from Marc Anthony, maybe Celia Cruz.

Salsa is considered a musical genre that has become popular among Spanish-speaking countries, of course2, but it has also been exported to other countries in the world.

What you may not know is the life lesson so beautiful that African slaves3 who lived in the 16th and 17th centuries4 left forever hidden5 in the percussion of these songs.

This podcast is a tribute6 to them. You want to know why? Well, you have to have a little patience because the subject is not easy to explain.

Where and how salsa started, that is, the place and manner of the birth of salsa, is controversial and this controversy has to do with7 its origin and subsequent8 evolution.


In fact, the controversy begins even with how we explain this very complex9 topic. Therefore, in this podcast I will try to be as objective as possible for you, since you are a Spanish student, because to go into too many details already caused10 or causes controversy11 and even anger! Hahaha (polemics is a synonym for controversies).

And the thing is that music, after all12, is passion, and passion is subjective and awakens many emotions in humans.

I will try not to go into much detail, which is a bit difficult when it comes to this topic, since, as a famous saying goes, Quien mucho abarca poco aprieta, or You shouldn’t bite off more than you can chew13. Do you know this saying?

First, I will begin with a brief overview14 between the two different opinions.

However, before I want to make an important clarification: If we are strict with the term salsa, that is, as an official term to define a musical genre, this term was used officially and openly for the first time in the 60s and 70s of the last century, of the twentieth century to designate15 a musical genre that occurred in a new generation of mainly Latin musicians in New York.

Now, what are the two different opinions about this?

According to the first opinion, salsa is used to refer to this famous boom that takes place in New York in that period16. Yes, this is not usually discussed.

However, for them this genre was not new since they say that the basis of this rhythm is the Cuban Son.

We could say that for them salsa is a Cuban Son that, like everything else in life, evolved17. It was transformed by mixing with other rhythms, forming what was later officially called salsa in New York.

These people defend the “Cuban nationality” of Salsa since for them there is not a big enough difference for them to be two different genres.

On the other side we have the other position or vision; that of the people for whom the Salsa musical genre was born exclusively when salsa began to be used officially in New York around the 60s and 70s.

And nothing that existed before should be called salsa. So18, for them it is a new genre that emerged or was born as a fusion between the different musical genres that influenced the mostly Puerto Rican musicians raised in New York, or already born in New York of Puerto Rican parents, the so-called Nuyoricans.

For them, what existed before the so-called Salsa was different enough not to be the same thing and that is why this new mixture or fusion was given a new name.

That is to say, for the first group, salsa is Cuban, because it is simply Cuban Son that is mixed with other rhythms, yes, but its base already existed in the Cuban Son, salsa and Son cannot be such different things. Simply what was born in New York is a different style although it’s within the same musical genre; and for the latter, the Son Cubano is just the root19 of salsa, they do not identify salsa as something Cuban, but rather as something Nuyorican.

Trying to assess who is right is complicated and I think, it is worthless20.

No valer de nada or not worth anything is a typical Spanish expression, which is the same as saying that it is useless or that it is a waste of time.

For this, I will simply start at the beginning and end at the end. Everyone can choose the opinion and style they prefer.

Or maybe we do not have to choose anything. Maybe we can accept all the styles since the human being does not always want the same thing and, possibly, each style has its moment to be enjoyed, listening to it and/or dancing it.

Whatever the opinion, there is a historical reality that is real and thanks to it, this music exists today.

So I’m going to keep telling the story.

During the American colonization by the Spanish, the Spaniards began to take African slaves in the sixteenth century to the Caribbean islands, Cuba, Puerto Rico, and the Dominican Republic.

Everyone knows the importance song and dance had in many African tribes21 through the centuries, especially percussion.

These slaves continued with their chants and rhythms in Cuba. It was during the era of the abolition of slavery22 and the subsequent independence of Cuba from Spain, when African rhythms like the guaguancó, could be heard in a freer way by all the island.

Music is something alive that comes from the heart and, therefore, it is difficult to put dates on when it was mixed with this or that type of music, who did it, how it happened exactly, or at what time and in what city or town.

There are no documents where you can check everything. However, it is said that the Cuban Son is a mixture of that African guaguancó and the musical sounds that the Spaniards brought to Cuba.

This became a melting pot23 of styles from the African and European continent, mixed in the American continent. Then we add the influence of other rhythms like those of Haiti, on the nearby island of Hispaniola, a country colonized by the French.

The point is that from all these roots come the so-called Cuban Son that has been popularized outside of Cuba since the 1930s.

In this podcast, I would love to have examples of this music. However, I cannot include them here because of the famous copyright.

If committed24, this infraction would cost a uno ojo de la cara25, have you ever heard this typical phrase? If something costs you an “eye of the face” it means that you pay too much for that. In English you might say “an arm and a leg”. Another similar expression is if I committed this crime, it would cost me un riñón or a kidney.

So, at the end of this podcast you can see links to songs that will serve my explanations, in case you are curious and want to listen to them.

The Cuban Son is not the only rhythm that emerges in Cuba from a base of African percussion, other important rhythms are the chachachá, the danzón, the mambo or the conga.

All these rhythms with an African origin, were exported to Latin America where their influence initiated other rhythms that are still alive today.

But they were also exported to Spain (where people like my father bought these records and where, many years later, when I was a child, I listened to them in the living room of our house on our record player26 for vinyl records27).

And, of course, they were also28 exported to the United States, where the Latin American population of the United States grew and, among all the cities, there was one in particular where it was popularized: the city of New York.

Do you want to know what happened there at that time? I will tell you all in the second part of this podcast.

This vocabulary list gives the meaning of each word or phrase in the specific context of this podcast. Some of these words/phrases have other meanings too that are not mentioned here.